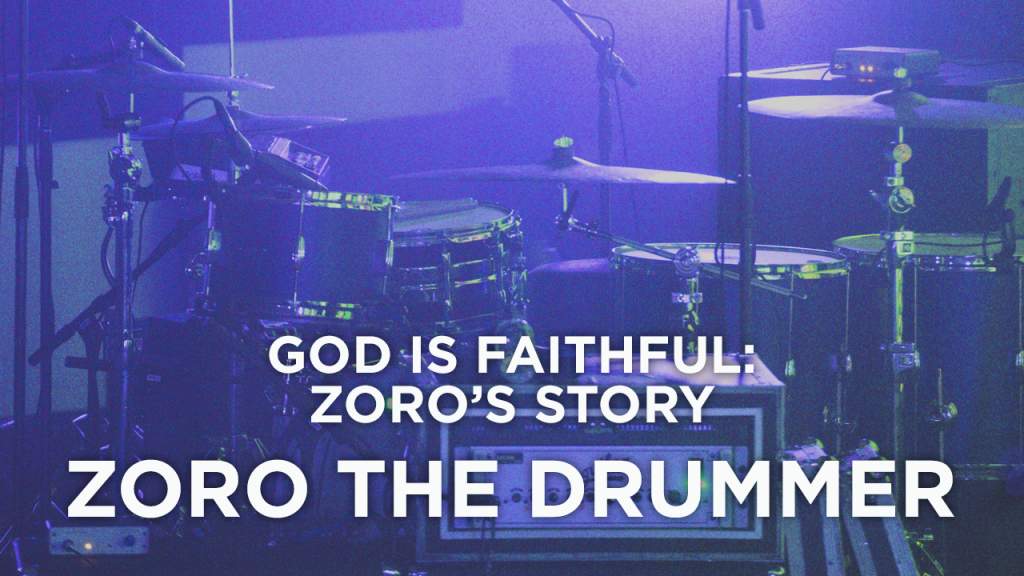 Encouragement from Phil 1:6 from Zoro the Drummer

Listen to the Podcast

Zoro Known as the "Minister of Groove," Zoro is an internationally renowned rock star, motivational speaker, author and the definition of a man who marches to the beat of a different drum. As one of the world's most respected musicians, Zoro has sat on the drummer's throne commanding some of the most famous stages in the world of rock and R&B music. Z (as he is known to friends) has toured and recorded with Lenny Kravitz; Bobby Brown; Frankie Valli and The Four Seasons; The New Edition; Jody Watley; Philip Bailey of Earth, Wind & Fire; Angie Stone; Vanessa Paradis; Sean Lennon; Lisa Marie Presley; Tommy Walker; Lincoln Brewster; Phil Keaggy; Barlow Girl; and many others. Throughout his career, Zoro consistently has been voted the No. 1 R&B drummer and clinician by premier music industry publications such as Modern Drummer, Drum!, and Rhythm Magazine. Z has authored the No. 1 award winning and best-selling book and DVD series The Commandments of R&B Drumming, The Commandments of Early Rhythm & Blues Drumming and The Commandments of The Half-Time Shuffle (Alfred Publishing). His books are listed in the Top 25 Drums Books Of All Time by Modern Drummer magazine. As author of the critically acclaimed book, The Big Gig: Big-Picture Thinking For Success, Zoro has equipped countless people with the tools needed to excel and succeed. Richly gifted as an encourager and life coach on the topic of achievement, Zoro is a kinetic bundle of energy and enthusiasm. He captures audiences and readers around the world with his unmistakable style, sense of humor and conviction. Zoro's practical wisdom empowers and encourages everyone to strive for the greatness that lies within. His genuine passion to serve and inspire led to him being honored at the nation's capitol as a part of the White House Fatherhood Champions of Change & Convening of Engaging Men and Boys. Zoro was among a select group recognized for the important work they do to help shape culture by promoting responsible fatherhood and mentoring. An ordained minister who has traveled the world as an ambassador of God, Zoro also established Zoro International Ministries (ZIM) to teach Biblically-based achievement skills, nurture purpose and offer inspiration to young adults (age 18 to 29). ZIM helps young adults throughout the world understand their unique God-given gifts and fulfill their divine assignments on earth. Its mission is to develop a rock-solid, Christ-centered foundation in young adults by providing tools and support, guiding them to become their nation's next generation of leaders. Zoro is also a spokesperson for Compassion International and Big Brothers Big Sisters of America. A powerful and purposeful communicator, Zoro connects with people of all ages. The indelible mark Z makes with his music, words and life continue to have a profound impact on those who come across his path. God, family and serving others are the most important priorities in my life. I have been married for 19 years and have two children ages 12 and 15. I love being a father more than anything in this world and I love playing the role of the father to the fatherless!
Contact